33 years ago – Kes Varn is born to military-serving parents on Iridonia.

15 years ago – Kes finishes the academy successfully at 18, but chooses not to go into service; leaves home for a job at Cross-Galaxy Corp., a small shuttling company.

13 years ago – CGC is shut down, its ships taken under custody of soon-to-be-Imperial-Friendly members of the Republic due to “questionable activity” that was never completely proven; Kes moves on to even more questionable business to work on the security force of a merchant and private arms dealer, a hutt named Megool; meets Nalin Nerr, a zabrak in charge of said security force.

11 years ago – Megool notices things getting too tense and lays off much of his security force, in fear of them being of questionable loyalty, causing Kes to be quickly promoted to second-in-command. Megool relocates to a planet farther from the tension but also in the midst of its own political turmoil.

9 years ago – Kes and Nalin marry.

8 years ago – Kes and Nalin quit Megool and leave on Nalin’s ship, the Silent Destiny. They settled happily on Etti IV, though had joined a small company performing minor shipping between local planets.

7 years ago – Kes gives birth to twins, Jeta and Ganan.

5 years ago – While refueling on Telos, Silent Destiny was stormed by unknown attackers. The family hid in cargo storage, but the twins, frightened, ran out. Nalin jumped out to follow and get them back, but all were shot down on sight. Kes incapacitated the majority of those that did not flee and took off.

3 years ago – Kes makes a stop on Ord Mantell, only to fire her previous pilot for various offenses (sexual harassment, thievery, drunk behavior on-duty, etc.) and finds herself stuck there, not being the best pilot herself. Her search for a new pilot leads her to a bar Kaylani frequents; the bartender points her in the direction of the young pilot, who had left to find another bar. Kes finds her getting mugged nearby and proceeds to shoot down the thugs. Despite some initial doubt, they become fast friends and Kes finally finds her pilot.

They have since been performing odd jobs of cargo transport, passenger shuttling, and a variety of other legal and…not-so-legal jobs.

Kes is relatively on the quiet side. More often than not, she isn’t particularly paying attention to what’s going on, her mind elsewhere. But when it comes to business, she is focused and attentive. She is remarkably blunt when speaking; some find her without empathy, but others find her plain-spoken nature refreshing. In truth, she prefers not to lie. That’s what Kaylani is there for. Her demeanor is calm and much of what she says is underlain with a wry smile, making it impossible to tell whether she is joking, sarcastic, or serious. She is not often moved to anger, but every once in a while, she will encounter an injustice she cannot ignore and will shut down Kay’s persuasion attempts and instead proceed to bully her way through negotiations, sometimes even resorting to violence, though that is rare.

She prefers to not speak of her family, still blaming herself for not saving them. However, if sufficiently pressed, she may give away small details. Kaylani knows some details, given that nightmares of the event proved difficult to conceal from a roommate, but even the young pilot is in the dark about much of it; some of their travels have also led them to some details as to the identity of the attackers, though Kes herself does not have enough resources to find them or even properly identify them.

Interestingly, despite having been in possession of the ship one way or another for the last decade, Kes and the Silent Destiny do not get along as well as expected of a captain and her ship. Despite Kes’ urgings and repairs, the Destiny has a “habit” of breaking down around its captain. In revenge, Kes maintains that the ship is an object and thus does not need a gender, and if it did, it would be male for being so difficult. Still, the ship does what it needs to do when the time comes, and they are more like old rivals than anything; having Kaylani aboard has also certainly improved the old ship’s “mood”.

Portrait by EllaNutella on DeviantArt 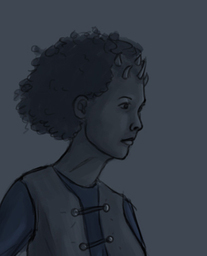