"Curiosity killed the cat, but satisfaction brought her back."

BACKGROUND
Kaylani was born on-ship, and while she never knew who her father was, she traveled from berth to berth with her mother, mechanic Marta Seren. Periodically, if her mother had a dangerous or short-term posting, Kaylani would stay with her Uncle Savit on Ord Mantell, where she easily charmed all the regular customers at his quiet restaurant. She got her first solo posting at 16, as co-pilot on a small merchant ship her mother had recommended to keep her out of the way of the pending war.

Three years later, she stopped off at Ord Mantell to visit her Uncle, and learned Marta had dropped out of contact about half-way through the war. Over the next four years, Kaylani did a lot of local shuttle work in order to stay with Savit, help out at the restaurant, and keep an eye and ear out for news on her mother.

After returning home from a six-month berth, Kaylani was devasted to discover the restaurant closed, and no one knew where her Uncle had gone. He’d left no message, and everything he owned was gone. As was everything she’d owned, including the savings she’d left in his care. Shocked and depressed, she got herself drunk, mugged, and then rescued by Kes Varn, the owner of the Silent Destiny, who was in need of a pilot.

Kaylani immediately felt a connection to both the Zabrak Captain and her old ship, and has happily spent the last three years piloting Silent Destiny. She and Kes have been moderately successful with “mostly legal” shipping and ferrying jobs, and Kaylani has even managed to restock some basic equipment and earn a slight cushion of credits. The only worry she has is the continuing lack of clues regarding her family’s apparent disappearance.

PERSONALITY
Likeable, quick-witted, and fast, Kaylani Seren is perfectly aware that “charming” is a verb, and is generally wary of the motives of everyone she meets. (Partly because she’s perfectly willing and able to tell anyone she meets anything they want to hear. Especially if she needs something.) She is completely loyal to Captain Varn, however, and can never resist indulging her curiosity. She is never completely unarmed, just in case. 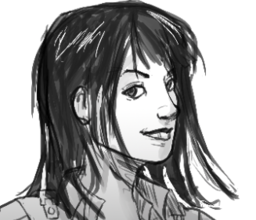